Unlike a lot of curries (i.e. my Tomato & Chickpea Curry) that are heavy on earthy and grounding spices like cinnamon and cumin, aloo gobi tends to be a bit brighter and “fresher” with a stronger influence of spices like coriander and ginger. It’s a subtle difference that makes this curry very energizing and refreshing.

Typical aloo gobi includes neatly diced potatoes and cauliflower, but we’re doing something totally different here. Sacrilegious as it may be, I’ve MASHED the potatoes, which are infused with garlic and cilantro, and spread them on top of the cauliflower (which is curried in a traditional way), and I’ve also added tofu (not typically included in aloo gobi) to add some protein and make this a more complete meal. Then, the whole thing is baked like a Shepherd’s pie. I love this technique because it allows the spices to soak into the cauliflower while the mashed potatoes create a seal on top and become all crispified and gorgeous. It might not be your local Indian restaurant’s idea of aloo gobi, but it sure is tasty. 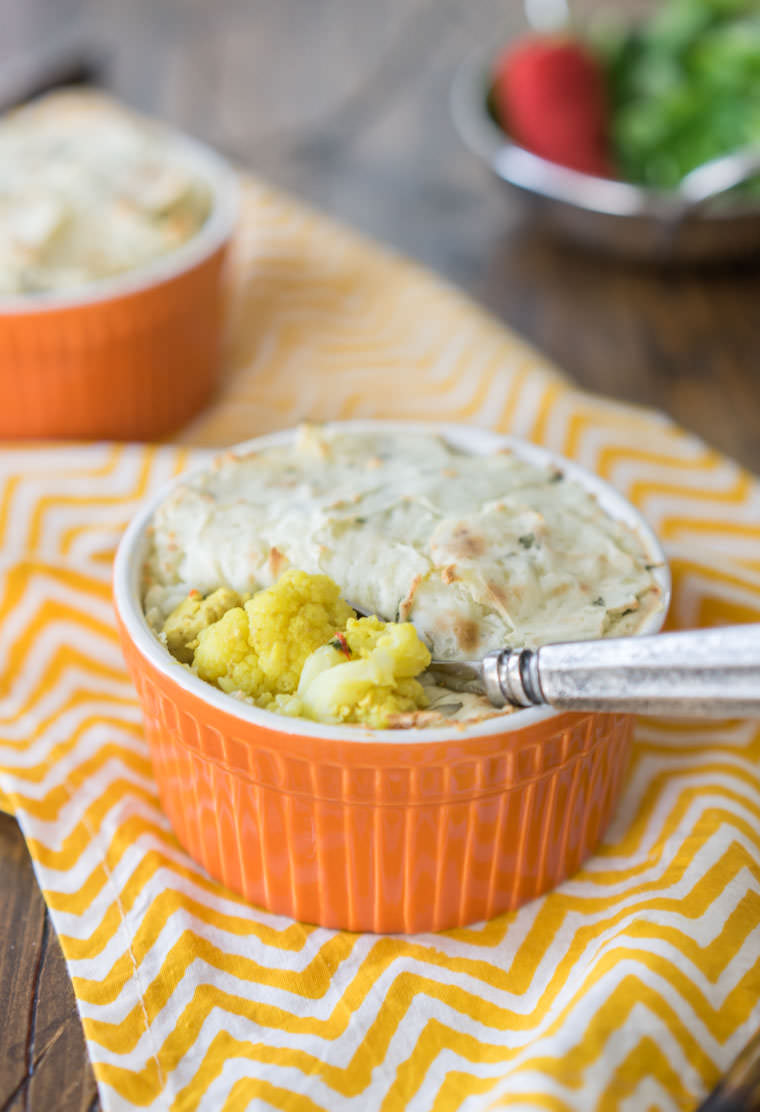 Begin boiling a pot of water. Peel the potatoes, quarter them, and add them to the pot once the water reaches a boil. While you’re waiting for that to happen…

Make classic wet masala paste by combining 2 teaspoons minced garlic (reserving 1 teaspoon), minced ginger, coriander, cumin, turmeric and minced red chili into a small bowl with 1/4 cup of water. Then mash everything together with a fork to release more flavor and set aside for several minutes so that all these spices can mingle.

Chop up your head of cauliflower by cutting out the stem and then using your hand or a kitchen knife to break into small, bite-sized chunks. Also, dice up about 1 cup of firm tofu.

In a large pan, heat a tablespoon of vegetable oil along with the wet masala over medium-low heat at first (the last thing you want to do is burn the garlic and ginger, which will ruin the entire dish). Once warm, add in the cauliflower and diced tofu and toss to coat with the masala. Add a generous pinch of sea salt and allow this to simmer for about 10 minutes, until the cauliflower has softened.

At this point, the potatoes should be soft enough to mash. Remove them from the heat, drain the water, and mash them in a bowl with that other teaspoon of garlic, a small handful of chopped cilantro leaves, and enough non-dairy milk to make them creamy.

As the cauliflower mixture is softening, toss in a handful of chopped cilantro and then divide it into giant ramekins, oven-safe bowls, or just one large baking dish. Then, spread the mashed potatoes over top and bake for about 20-30 minutes, just until the mashed potatoes start to brown. Allow to cool before serving. 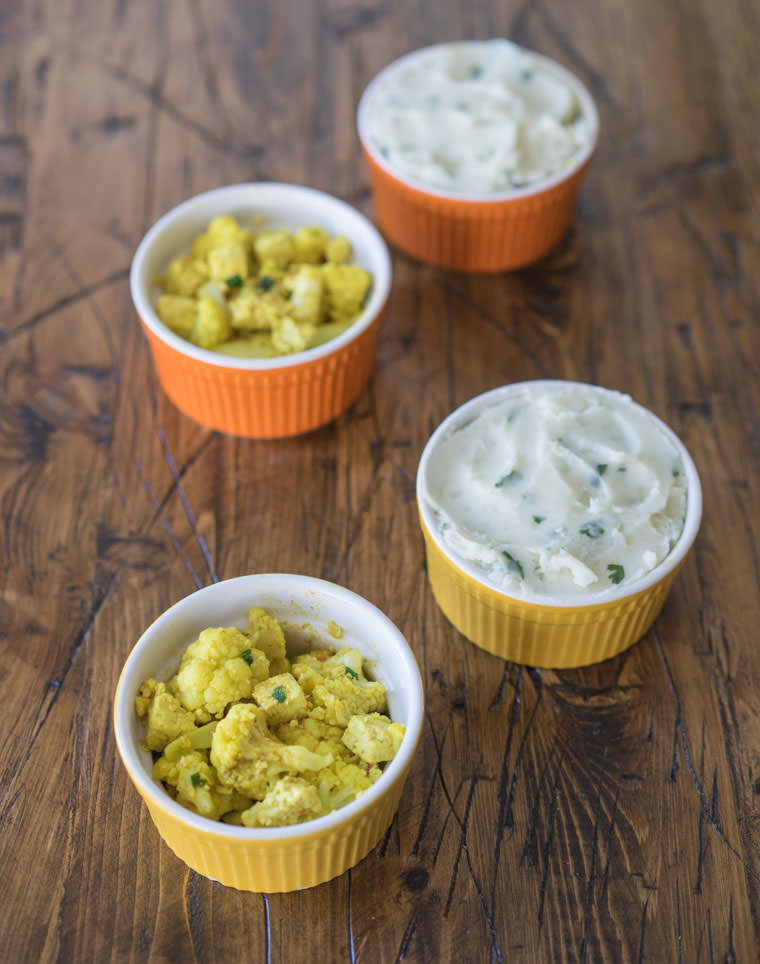 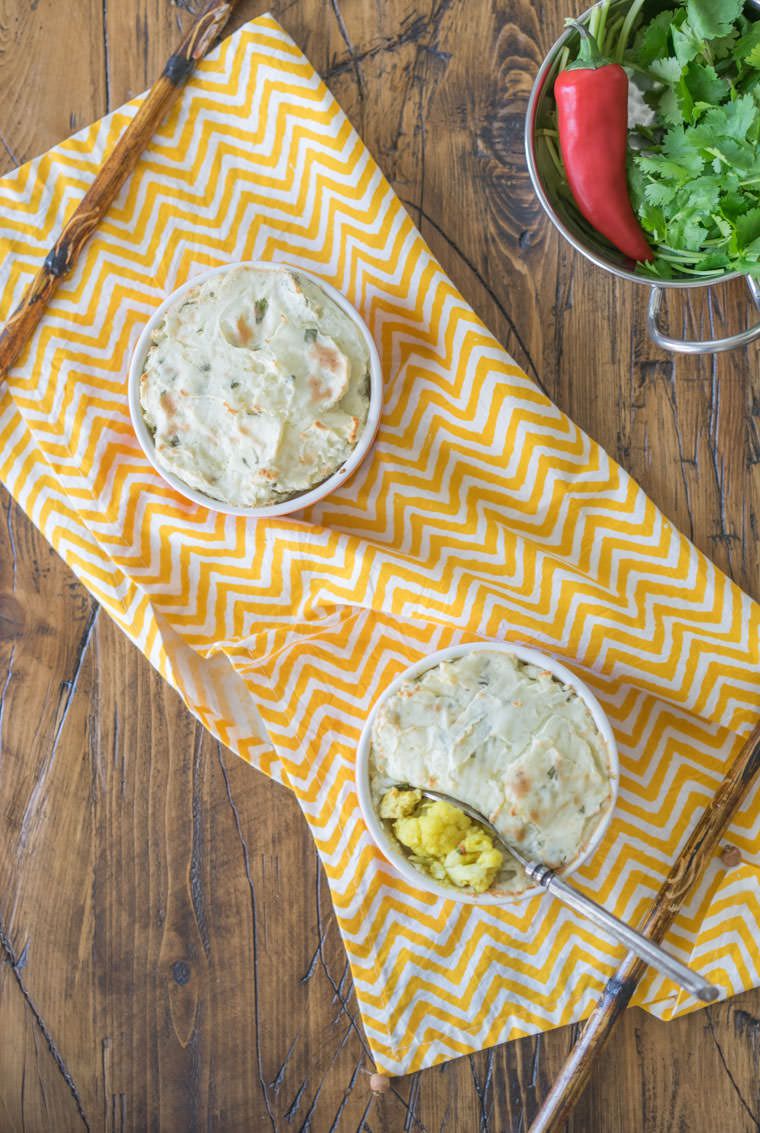