If I had to describe this dish, I might call it rice pudding, and risotto, and strawberries and cream. Like, all of that. All at once.

At its core, this is a risotto – it calls for risotto rice and we use the same technique as when making a savory risotto. However, the flavors (with plenty of real vanilla and cinnamon) make it feel much more like rice pudding. And then, with the addition of coconut milk and strawberries, it becomes something really incredible.

The thing I love most about this pudding is that it has absolutely no added sweetener. Rather than being a sickeningly sweet dessert, this dish is more like a light and refreshing meal unto itself. Make it for Sunday brunch alongside an equally light and refreshing sparkling wine (Prosecco?) and no one will be complaining… 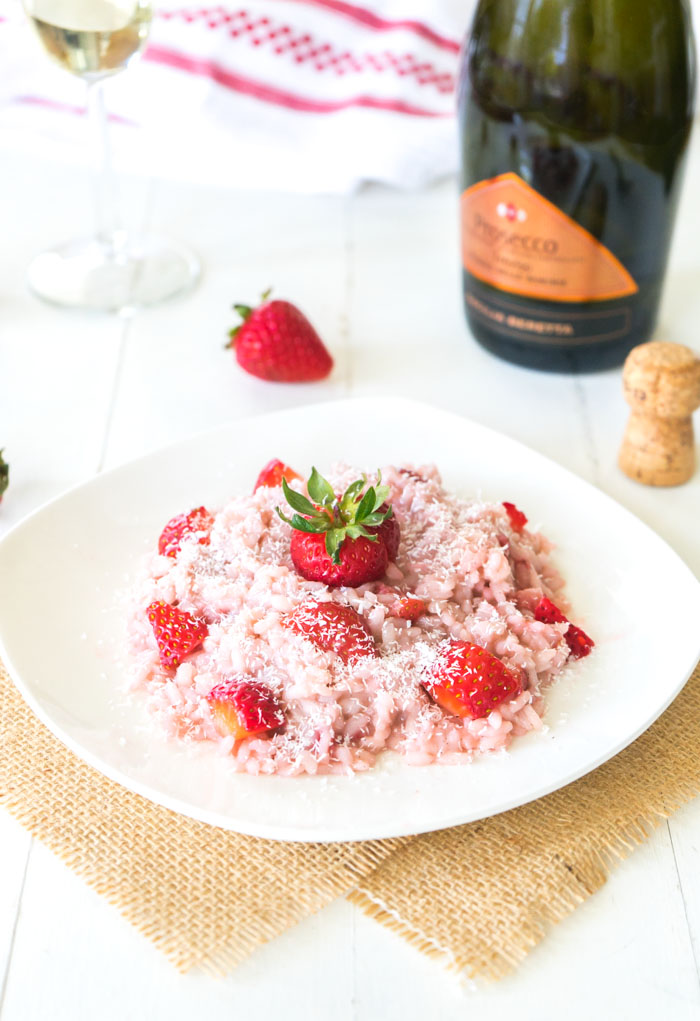 In a large skillet, heat 1-2 tablespoons of olive oil over medium heat. When the oil is hot, throw in the rice and let it absorb some of the oil for a minute or two.

In a large bowl, stir together 1 1/2 cup of hot water with 1 1/2 cup of coconut milk and set this next to the pan. Just as if we were making a risotto, we’ll ladle this mixture into the rice, letting the rice fully absorb the liquid before adding more. To start, add about 1/2 cup of the liquid into the skillet and stir with the rice.

On Using Real Vanilla Beans…
The secret ingredient in this dish is the vanilla bean. Unlike vanilla extract, real beans are a whole different experience. They are quite expensive (a few dollars each) but absolutely worth it in some cases. The dried beans are very long and thin, but inside are millions of minuscule vanilla seeds that taste about 2.7 bazillion times more like vanilla than the extract. To prepare them, you carefully slice them in half, lengthwise, revealing all the sticky seeds inside. You can then use a small spoon to carefully scrape out the seeds and add them to your dish directly, or like we’re doing here, simply toss each half of the whole bean right into the pan to let the seeds slowly defuse their way into the dish.

As mentioned above, split this vanilla bean in half and add both halves to the pan with the rice and coconut liquid. As the pudding cooks, it will slowly diffuse the millions of tiny seeds into the rice giving it a flavor more rich and creamy than words can describe. If you don’t have any way of procuring a vanilla bean, you can use 1 1/2 teaspoons of vanilla extract. Also, add in 1/2 teaspoon of ground cinnamon at this point.

Once the rice absorbs most of that first 1/2 cup of liquid (about 3-4 minutes), add another 1/2 cup at a time, stirring regularly, until the liquid has been absorbed. This could take 20-25 minutes, but it will result in a smooth, flowing consistency that is worth the effort. If you run out of liquid before the rice is fully cooked, simply continue using hot water. You know the rice is done when it has a gooey, flowing consistency and the rice grains have no crunch when you bite into them.

Time to start getting excited.

Just before the rice reaches this point, chop up about 1 1/2 cups of strawberries and add them to the pan along with a squeeze of lemon juice and a pinch of salt. Let this cook for several minutes until the strawberries dye the rice slightly pink, but before they completely break down and become too mushy. Oh – also pull out those vanilla beans!

Remove from the heat and let the dish sit for several minutes, allowing the rice and strawberries to become even better friends, then serve immediately. Squeeze a few drops of lemon juice over each plate along with a dusting of shredded coconut. 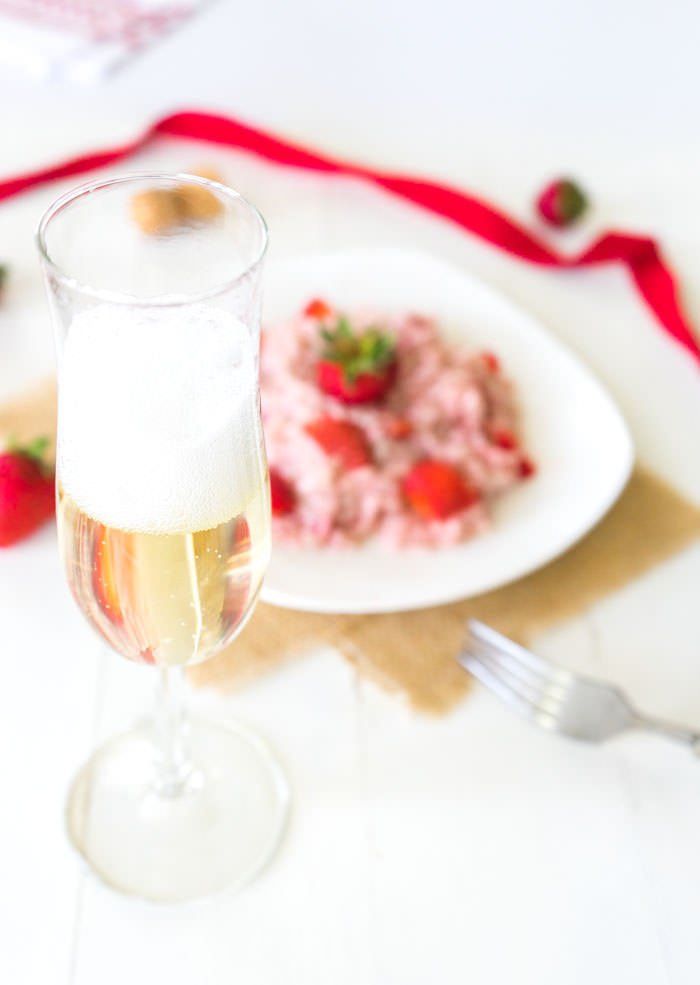 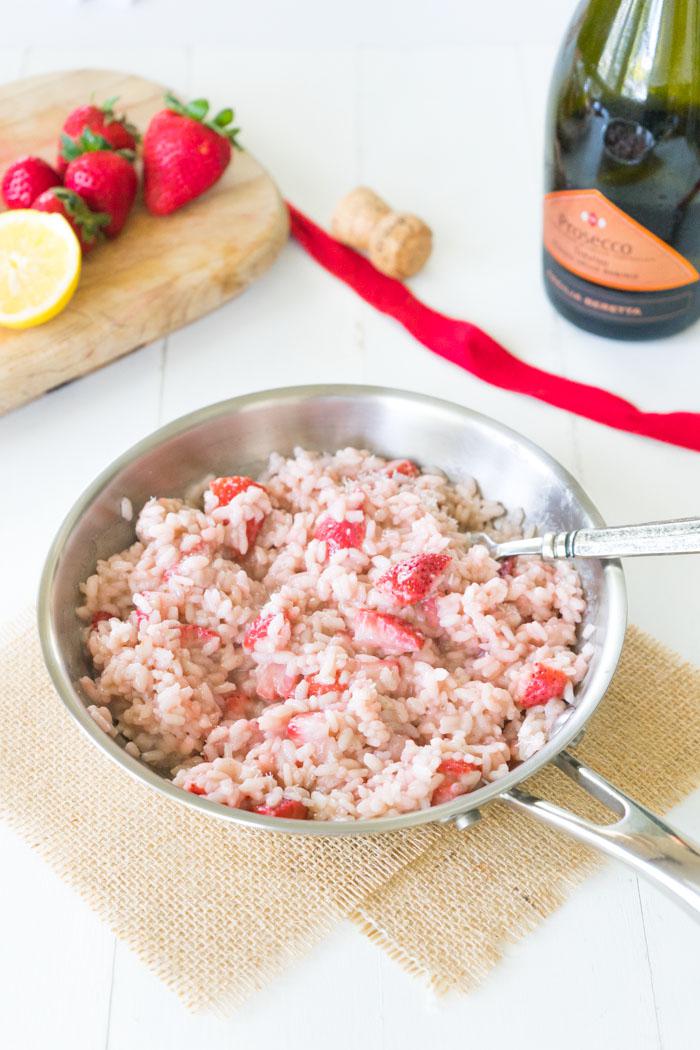 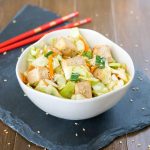 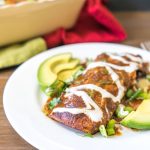