Corn chowder is simple. Pour some vegetable broth and cream into a pot, dump in some corn and chopped potatoes, then simmer until cooked. That might be corn chowder, but it’s also kind of… boring?

Here, we’re taking a different spin on this dish to create something that’s very flavorful and complex, while still keeping the core simplicity of the corn chowder we all know and love.

For starters, we’ll make this soup spicy by adding some red chilis. It will be “cheesy” thanks to the addition of nutritional yeast. And to make it even creamier, we’ll puree the whole thing until smooth. In all, it’s a quick, easy, healthy, unprocessed, and incredibly flavorful soup that makes a perfectly satisfying autumn/winter meal. 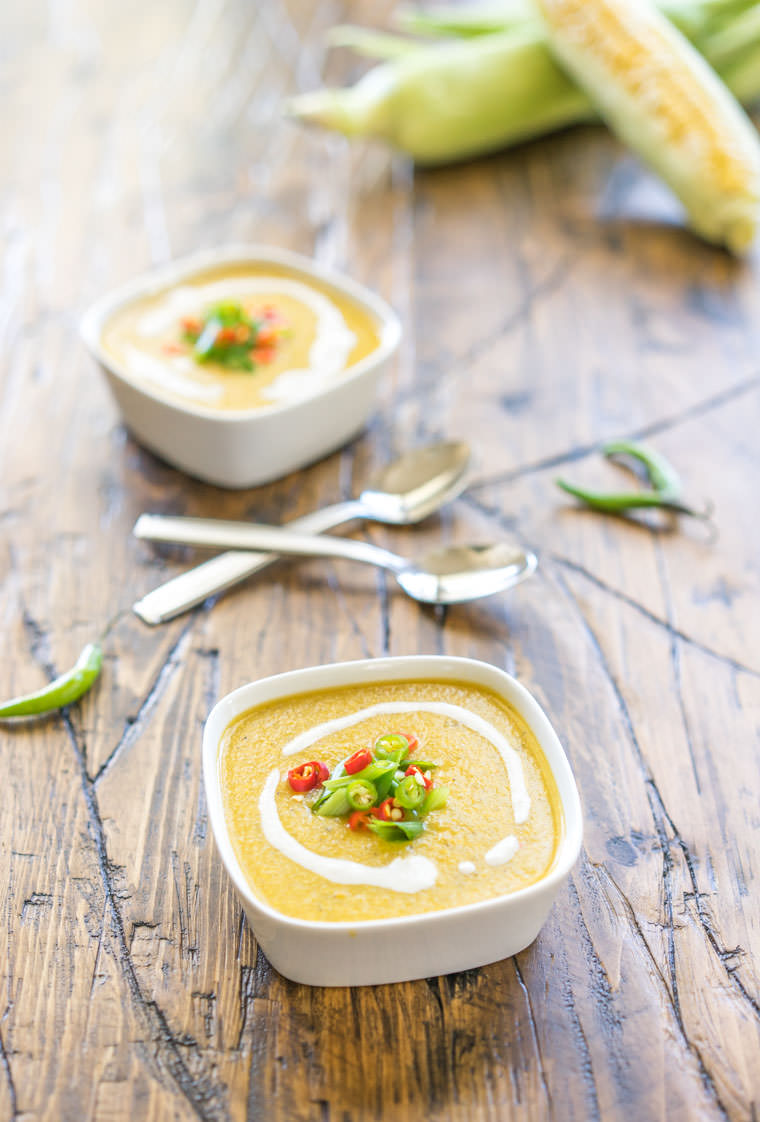 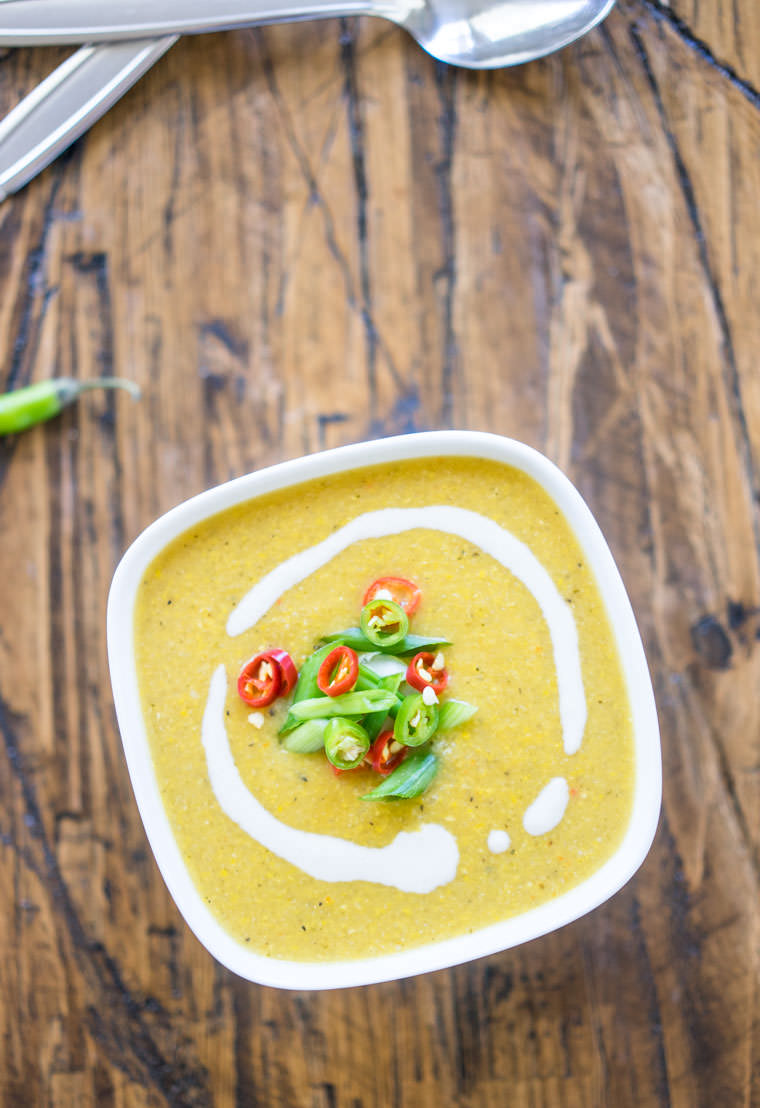 Peel two medium potatoes and then grate them using a box grater. Add these into a medium stockpot with the 4 cups of vegetable broth and 1 tablespoon of thyme. Allow to simmer for 15+ minutes to cook the potatoes.

In a different stockpot, heat 1 tablespoon of olive oil and toss in a loosely chopped onion and 4 stalks of celery (don’t worry what they look like, the whole soup will be blended later). Also pour in a splash of water and some salt and pepper. Once the onion is softened and starts to turn translucent, add 2 cups of yellow corn (fresh or frozen) and a bit of diced red chili. I used 1 thai chili, but feel free to use whatever you have on hand and adjust to your heat tolerance.

Give the corn mixture 5 minutes to simmer before pouring in the vegetable broth and potato mixture, as well as about 1/2 cup of non-dairy milk and 1/4 cup nutritional yeast. Add another few pinches of salt and grinds of black pepper, then let this simmer until the potatoe shreds are fully cooked (i.e. when you bite into one, there’s no crunch).

If you have an immersion (stick) blender, that’s perfect. Simply turn it on high and fully puree this soup right in the pot until it’s almost completely smooth. If not, remove it from the heat and carefully pour into a blender and blend until smooth (you may need to do this in two batches).

Return to the heat and give it another 5-15 minutes. As with most soups, the longer it simmers, the more balanced the flavors will be. Give it a taste and adjust the seasonings as needed – don’t be afraid to add more salt, pepper, or herbs at this point. You can also add a little water if the soup has become too thick (I added nearly 1 cup of additional water).

To serve, top with sliced green onions and a drizzle of cashew cream (simple recipe below) which is the perfect finishing touch to this dish.

Cashew cream: soak 1/3 cup cashews for 1 hour, then drain and blend the cashews with 1/2 cup of fresh water, 1 teaspoon apple cider vinegar, 1 tablespoon maple syrup, and a dash of salt. 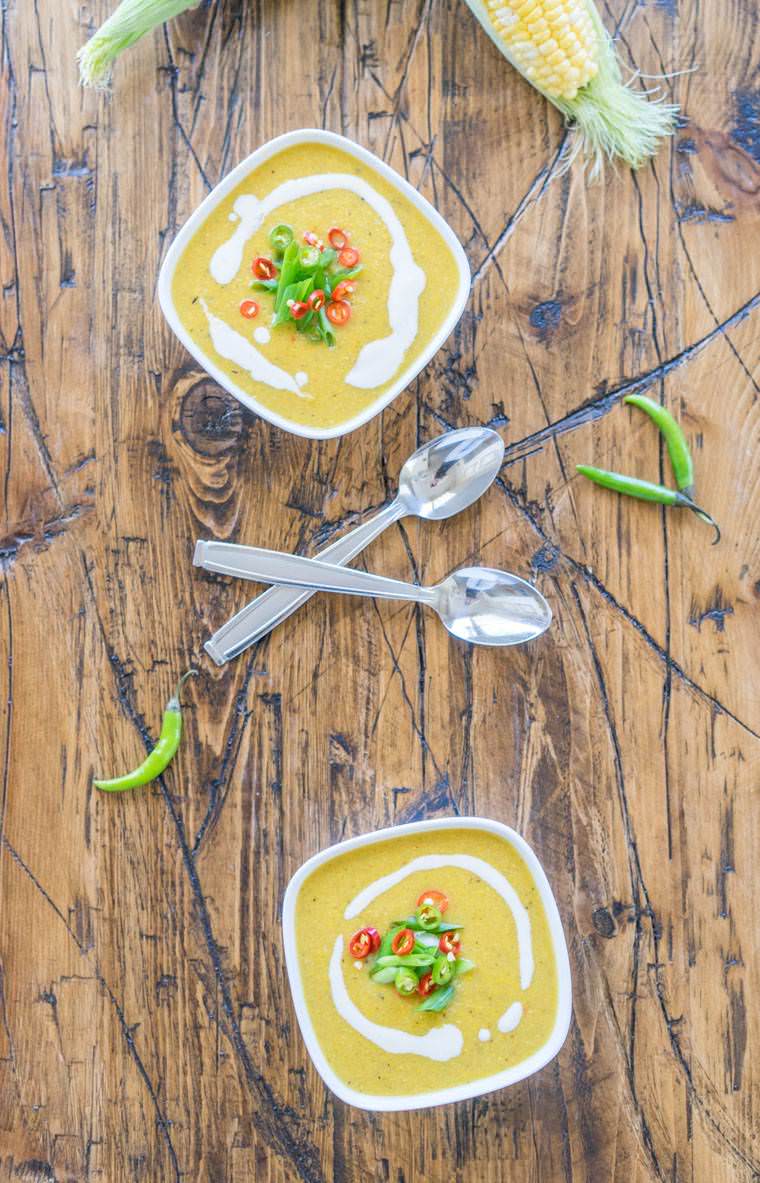 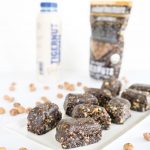 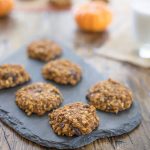