I posted a recipe last year for BBQ Potato Skins with cashew cheddar cheese and it was one of my favorite things I made all year. I got the inspiration from a BBQ restaurant that my family used to work at when I was a kid. One of my other favorite things on the menu was another potato dish, their famous twice-baked garlic mashed potatoes. They were creamy and garlicy, with a golden crust and a totally unique texture that develops as they bake.

Over the holidays, I asked my sister how they used to make those potatoes (sour cream was one of the secrets!) and started experimenting with a vegan version. Using tangy homemade cashew cream and following the same technique of boiling, mashing, and then baking the potatoes until golden, I think they’re just as good as the original, and by far the best mashed potatoes I’ve ever made. 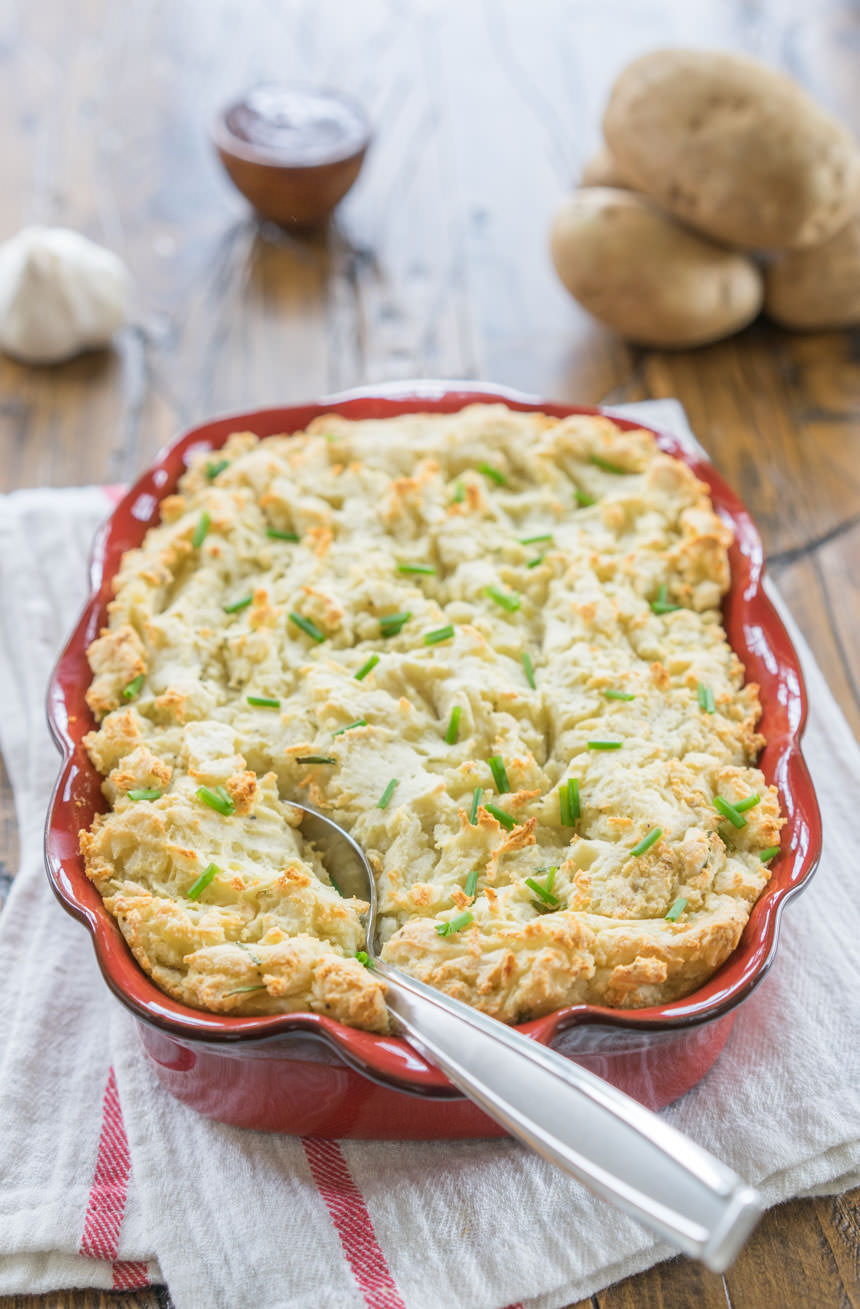 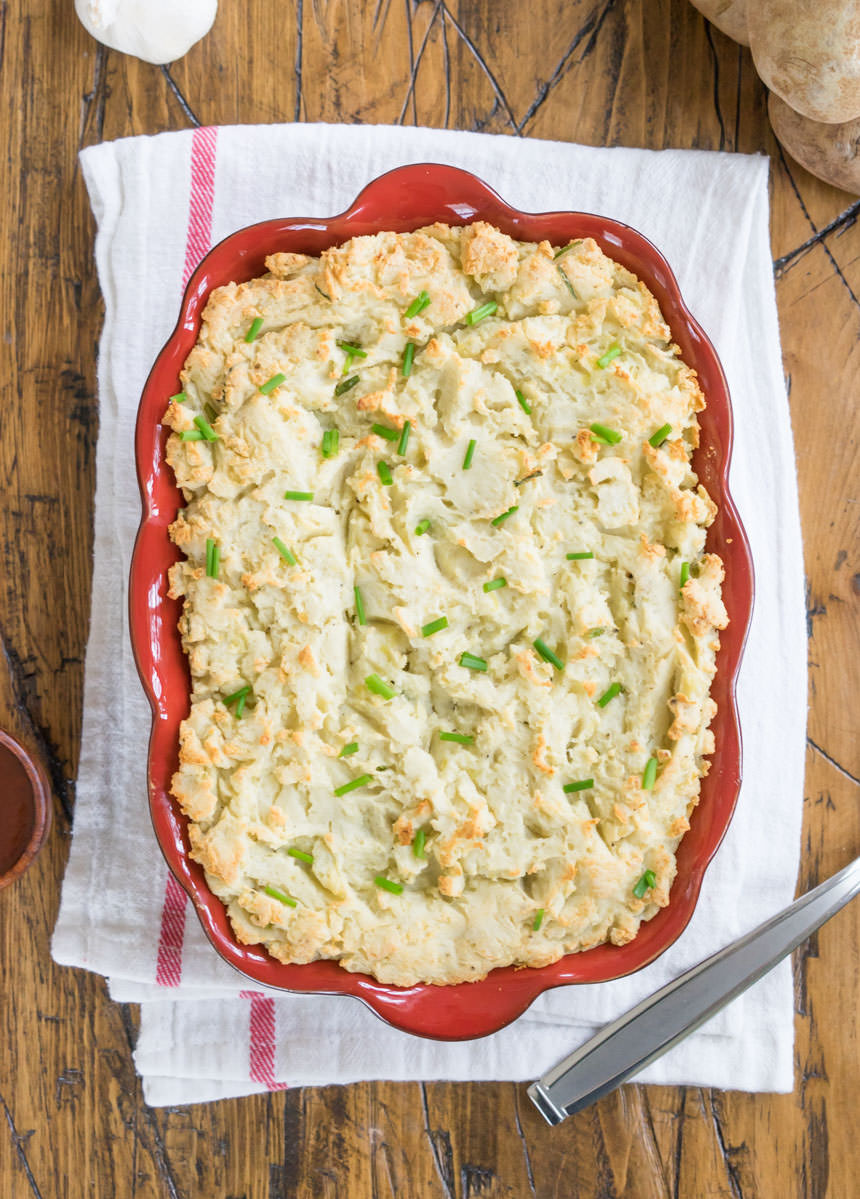 Prep:Soak the 1/2 cup raw cashews for at least an hour before blending.

Set a large pot of water to boil and begin washing, peeling, and slicing about 6 russet potatoes. When the water is boiling, carefully drop the potatoes in the water, and allow to cook until soft (about 20 minutes).

While the potatoes are cooking, make the cashew sour cream. Drain the cashews of their soaking water and combine in a blender with 1/2 cup of water, 1 1/2 tablespoons nutritional yeast, a tablespoon of lemon juice, and some salt. Blend until completely smooth and set in the refrigerator until ready to use.

When the potatoes are boiled, drain the water through a colander and transfer to a large mixing bowl and add in the cashew sour cream, 3 cloves of slivered garlic, some garlic powder to taste (yes, using fresh and powdered garlic is important), plenty of salt and pepper to taste, and a handful of chopped chives. Mash with a hand-masher or an electric mixer until mostly smooth (a few small chunks are fine). Give them a taste and see how the flavors are working, feel free to add additional seasoning as needed.

Spoon the potatoes into a large casserole dish, cover with foil, and bake at 400º F for about 45-60 minutes until the top begins to turn golden (it’s amazing how much the flavors and textures develop after being baked!) Sprinkle on a few more chives, if you want, and serve.

BBQ Sauce: Coming from a BBQ restaurant, of course these potatoes were always drizzled with BBQ sauce. It might sound like a strange combo, but trust me, a little BBQ sauce is the perfect compliment for these garlic potatoes. 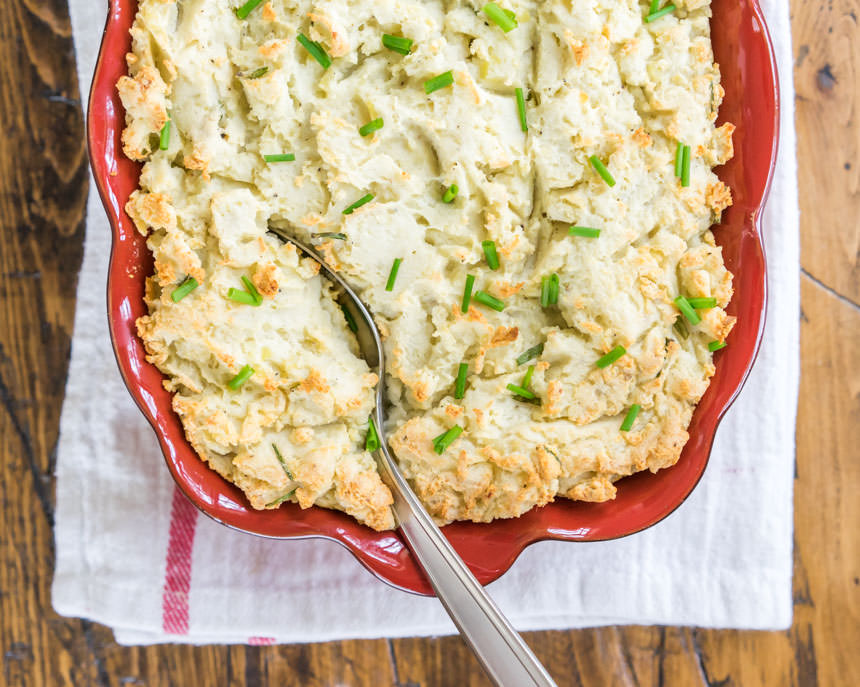 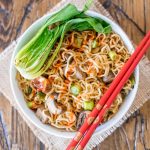 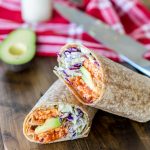