I have a big surprise for you guys! For the last month, my buddy Sam from ItDoesntTasteLikeChicken.com and I have been secretly organizing a brand new event called the Vegan Mystery Box Challenge. What is the #VMBC, you ask? Much like the TV show Chopped, the idea is that Sam and I would choose three mystery ingredients and invite all the other bloggers in our vegan community to create their own unique recipe with these same ingredients and we’d all publish them on the same day, in one big festival of awesome vegan recipes. 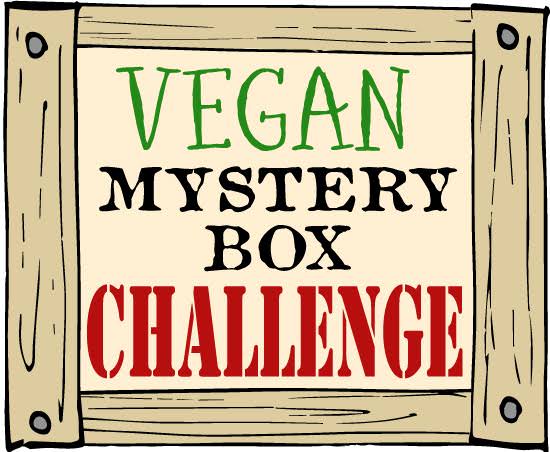 Well, today is that day! I’m so excited to introduce the first-ever Vegan Mystery Box Challenge, and the three ingredients we chose were [cue Ted Allen voice]… coconut milk, pistachios, and cranberries. We announced these ingredients to our group of 20+ bloggers about 10 days ago, and they all created some really unique and tasty dishes — check out the bottom of this post to see what everyone else created with these three ingredients.

As far as my own recipe, it definitely took me longer than the 30 minutes they have on Chopped to come up with the right dish. I knew I wanted to do something holiday-ish, and the combination of fruits and nuts reminded me of fruit cake, while the coconut and nuts reminded me of those horribly unhealthy Magic Cookie Bars (you know – buttery graham cracker crust, sweetened condensed milk, butterscotch chips, etc.) that everyone makes for the holidays. So, I decided to splice together a healthier spin on magic cookie bars with a fruit cake feel – all finished with a white chocolate drizzle made from coconut milk + cocoa butter. As bizarre as that all sounds, this turned out to be one of my favorite recipes that I’ve published all year. A pistachio crust, date and cranberry filling, and shredded coconut – all baked until golden and topped with a creamy vegan white chocolate sauce. The process is easy, the flavors blend so beautifully together, and it tastes like an edible version of the holidays. I’m definitely making them for Christmas next week and I hope you’ll give them a shot! 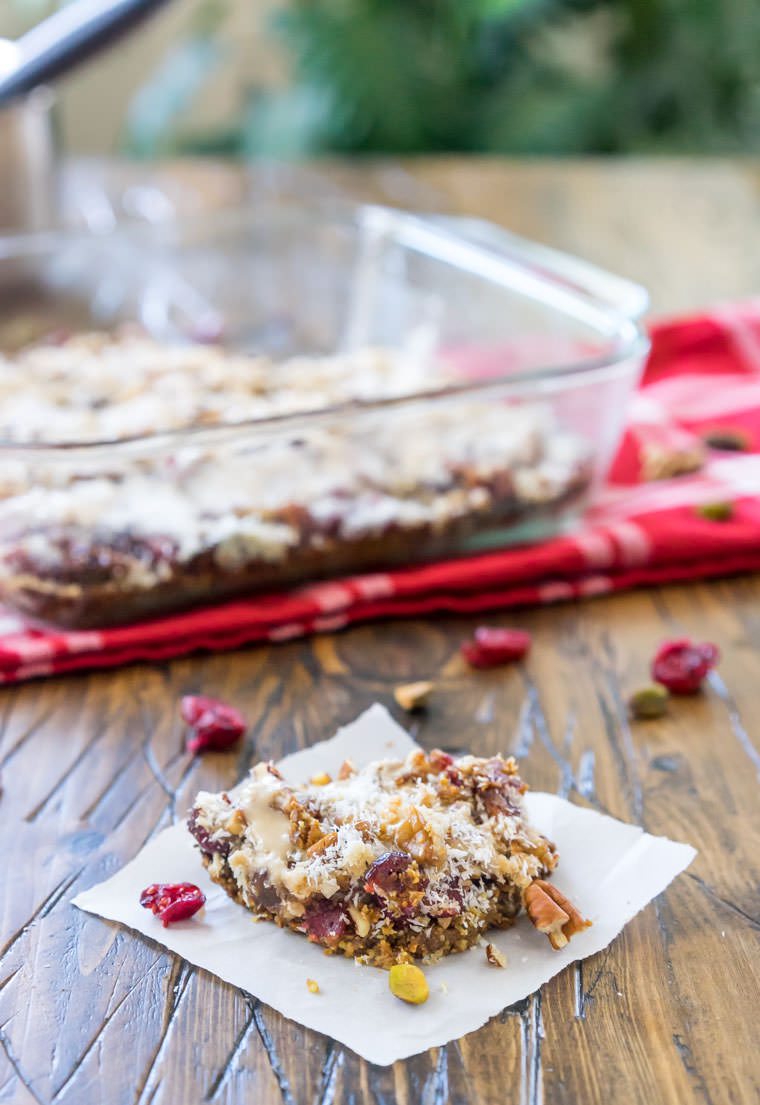 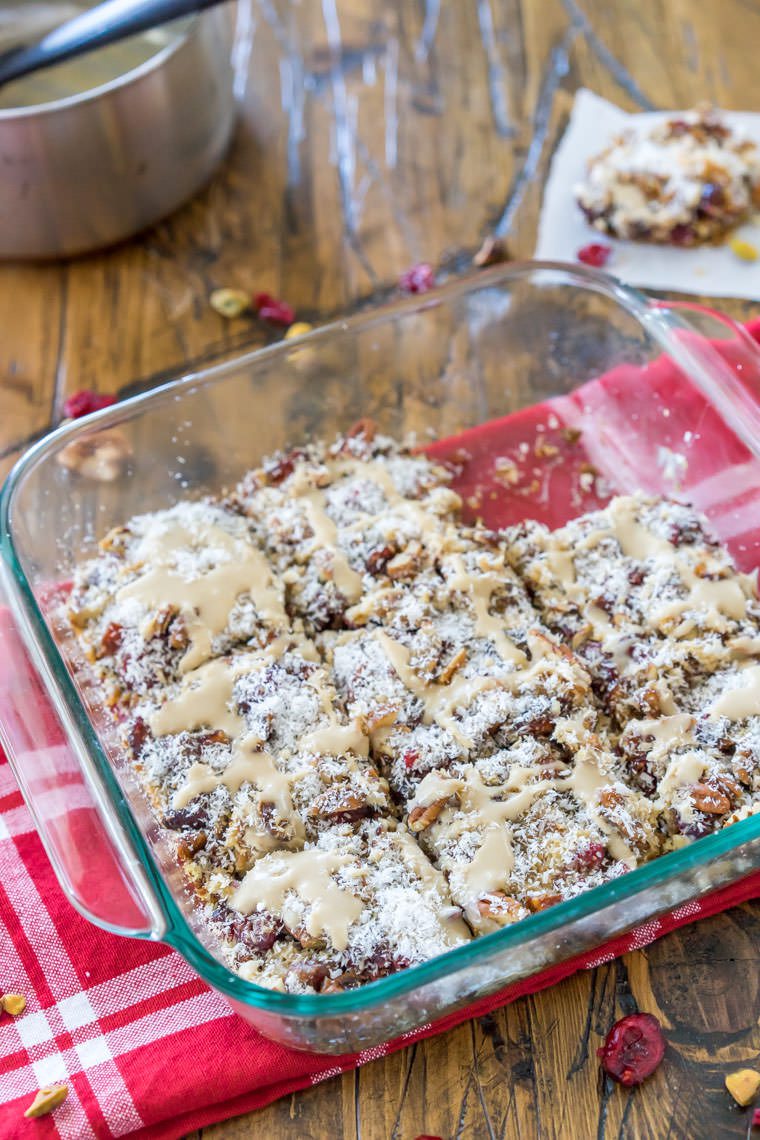 This white chocolate sauce is like liquid gold. It’s a totally vegan white chocolate that tastes amazing and actually solidifies when chilled. We’ll make this first so that it can chill while we’re doing everything else. Here’s how:

In a saucepan, combine 1/3 cup full-fat coconut milk with 1/4 cup of cocoa butter (can be found in most health-conscious grocery stores), a little brown/coconut sugar, and a pinch of vanilla. Keep the heat *very* low, as the cocoa can burn easily. Whisk regularly until the cocoa butter is melted and everything is incorporated. Remove from the heat and place this sauce in the freezer for about 10 minutes to firm up a bit, meanwhile…

Step One: The Crust

To make the pistachio-based crust, combine 1/2 cup pistachios, 1/3 cup pecans, 3 large dates, and 2 teaspoons of coconut oil in a food processor and process until fully combined and no large chunks remain. If you pinch a piece between your fingers, it should hold together. Press this crust down evenly in the bottom of a 9×9 inch baking pan: 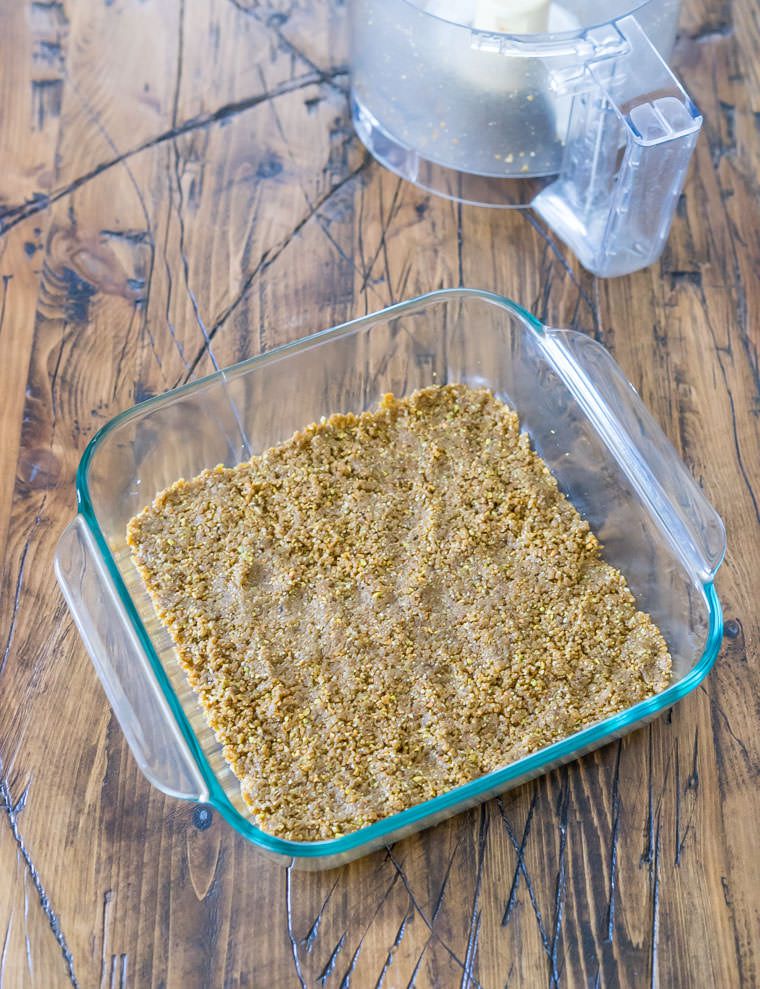 True to its name, this filling is halfway between magic cookie bar and fruit cake, made with dates, nuts, cranberries and orange zest. To make, simply measure out 1/2 cup of dates, 1/3 cup dried cranberries, and 1/3 cup pecans. Carefully chop them on a cutting board until they’re all in small, uniform pieces. Then, layer onto the crust and press down gently: 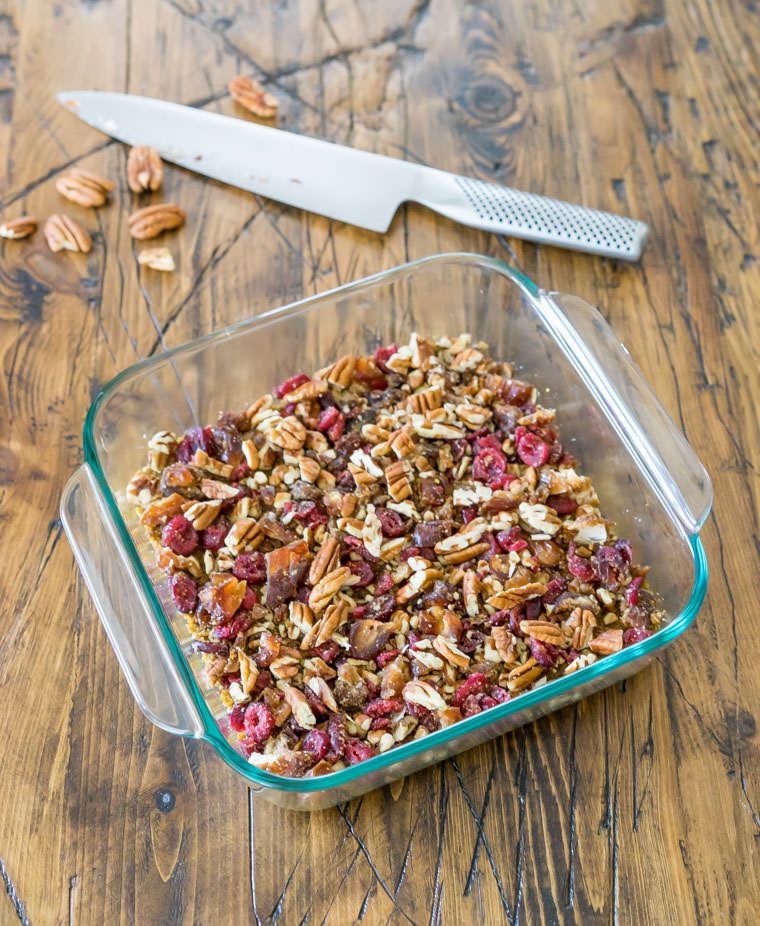 Sprinkle on half of the shredded coconut, then grab the white chocolate sauce from the fridge and drizzle half of the sauce evenly over the topping. As this heats, it will seep into the filling, but when it cools, it will create a firm texture that holds everything together.

When ready, pop these bars in the oven for about 15 minutes at 325º F just until the coconut begins to brown, taking care not to let anything burn. 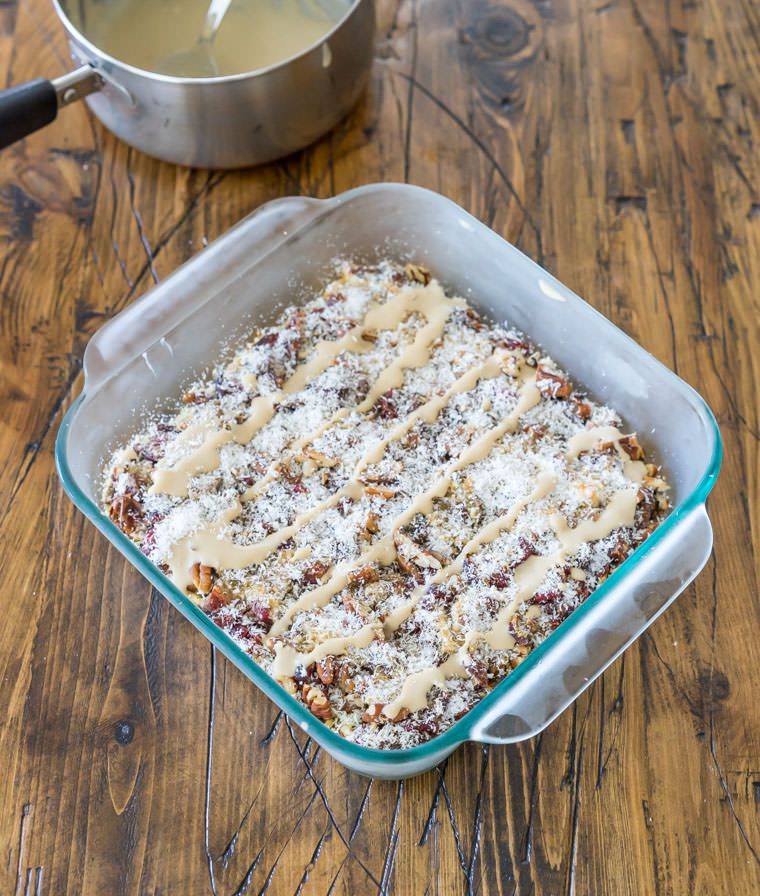 Remove from the oven and allow to cool to room temperature. Then, top with a little more shredded coconut and the rest of the white chocolate drizzle, which will now remain solid and create a beautiful garnish. Refrigerate for at least an hour so that everything can firm up before attempting to cut and serve. 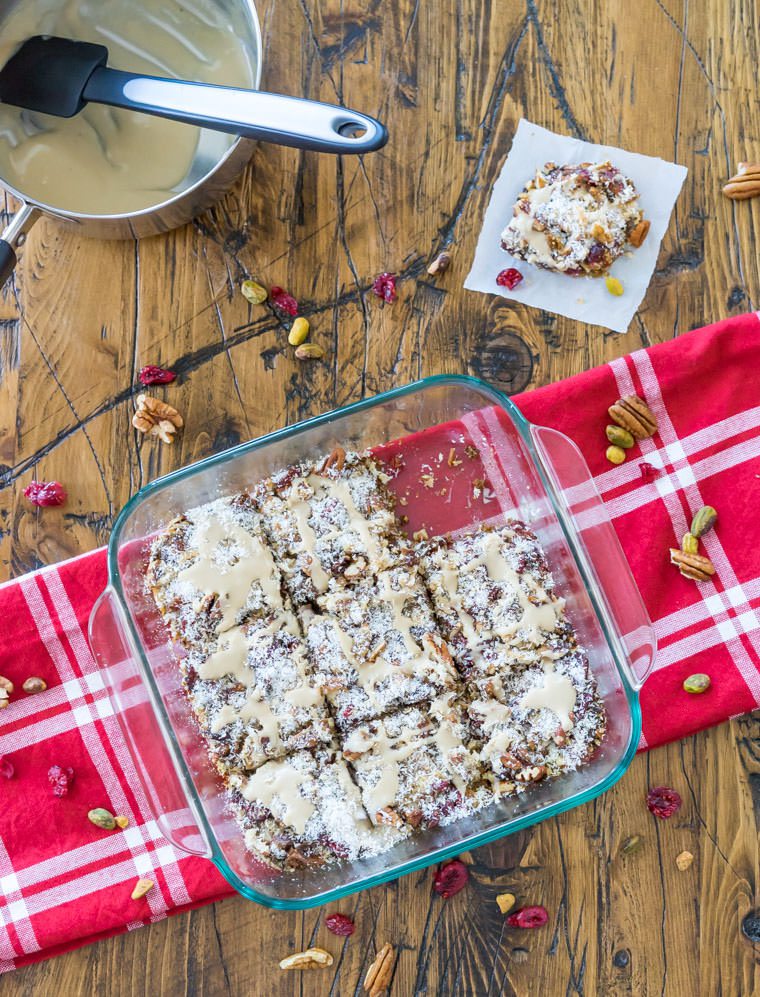 Check Out What Everyone Else Made for the #VMBC: 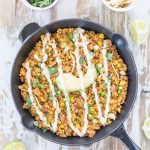 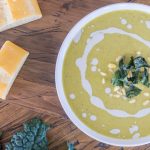