Paella! This classic Spanish dish is made from short-grain rice, tomatoes, and vegetables all simmered in broth. If you think it sounds like a risotto, you’d be right: paella is basically Spain’s version of the risotto you’d find in Italy.

The superstars of this dish are the spices and herbs, namely the two guys below: saffron and rosemary. Saffron is the world’s most expensive spice by weight, but it adds such a distinctive flavor. The rosemary, likewise, boosts the savory aromas of this dish to a whole new level. 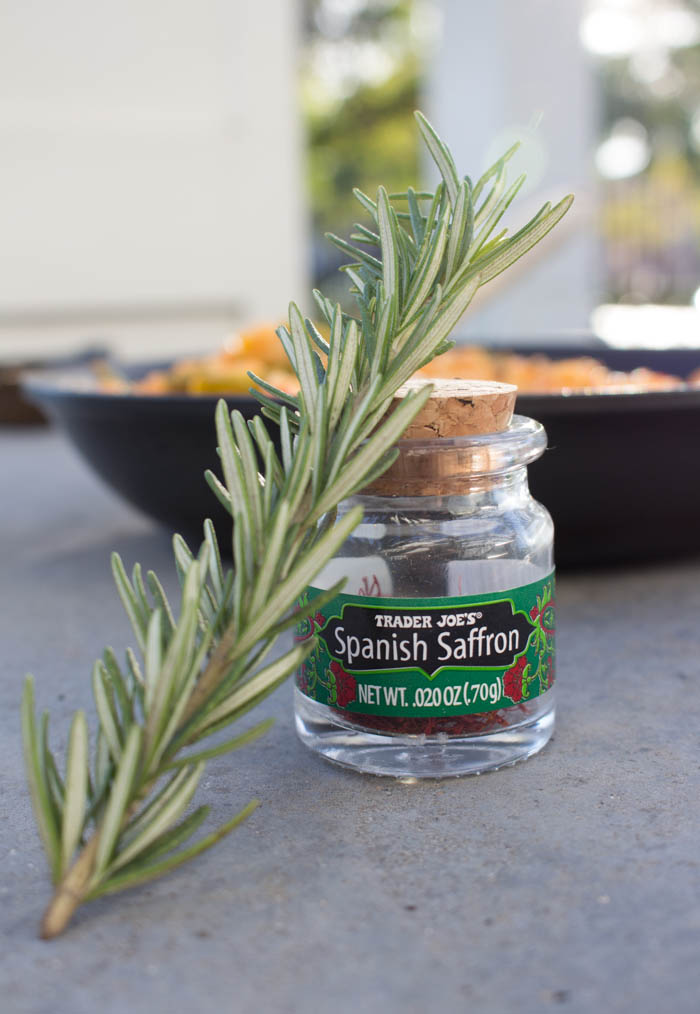 Paella (pie-ay-uh) also typically includes chicken or some type of sea creatures, but… that’s obviously not what we’re doing here. Instead, we’re adding cubed tempeh which ad— Wait, what is that look for? Are you turning your nose up at the idea of tempeh? Please, give it a shot in this dish. Since we’re adding it right from the beginning, it soaks up all the these fragrant ingredients to make it the most delicious tempeh you’ve ever tried – it really is the best part of this dish. 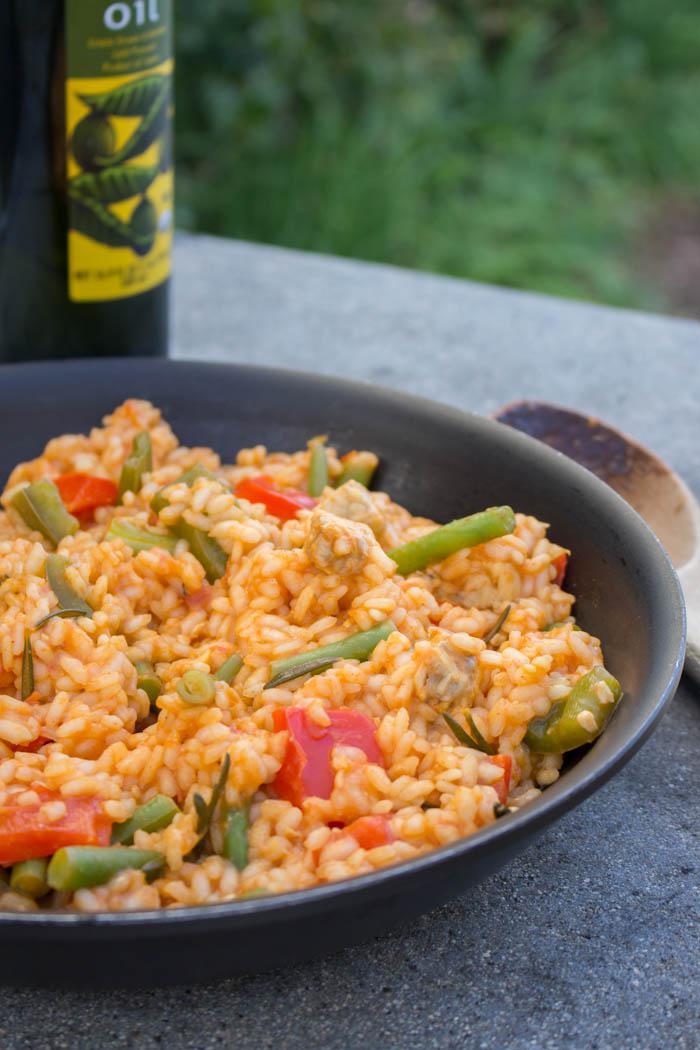 In a medium stockpot, add at least 6 cups of vegetable broth and warm over medium heat. Like with a risotto, we’ll be adding this broth one ladle-full at a time. For now, just keep this warm.

Prepare the tomatoes. You can use canned tomatoes, but I much prefer fresh ones for this recipe. Dicing them, however, will not do – they need to be completely pureed. To do that, quarter 4 whole Roma tomatoes and add to a blender or food processor until smooth. Set aside.

Technically, a paella is made in a special pan (also called a paella), but if you aren’t cool enough to own one of these, any large skillet will do. Heat a tablespoon of olive oil in your skillet and add the onion and garlic until they soften slightly. In a separate bowl, toss the rice with paprika, saffron, salt and rosemary leaves (simply slide the leaves off the stems), then add this into the large skillet and stir until combined with the onions and garlic. Let this cook dry for 1-2 minutes before adding about 1 cup of the pureed tomatoes to the rice along with the chopped bell peppers, green beans, and cubed tempeh.

Note: you can actually use any vegetables you’d like; peas, cauliflower, and mushrooms are all traditional ingredients you may want to try.

Next, ladle in about 1 cup of the broth at a time until fully absorbed and stir occasionally. Unlike risottos, paellas don’t require constant stirring. In fact, it’s perfectly fine if the bottom of the pan develops a slight crust, simply use a wooden spoon to scrape it back into the mixture every so often. When all the broth has been absorbed (about 20 minutes) and the rice is fully cooked (no crunch when you bite into it), give this a taste and add a little more salt or paprika as needed. If you run out of broth before it finishes cooking, simply add water until you have a consistency that is slightly runny. You don’t want pools of liquid, but you also don’t want it to be completely dry – it should flow smoothly like lava.

Stir in a squeeze of lemon juice, drizzle a tiny bit of olive oil over top, and enjoy as quickly as possible – if you wait too long (like I did to take these pictures) it’ll absorb too much liquid and lose its beautiful flowing consistency. Preparing paella on a BBQ and eating it al fresco will earn you extra credit. For extra extra credit, eat it directly out of the pan, with everyone simply pulling up a fork and taking a section for themselves. ¡Buen provecho! 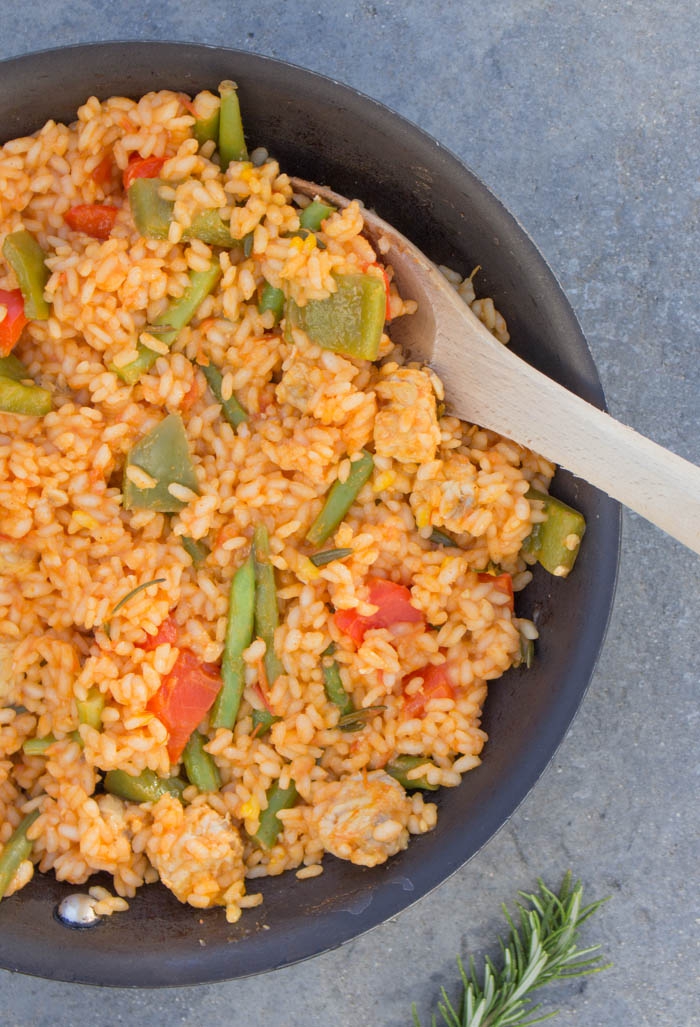 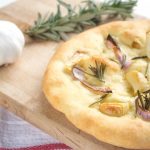 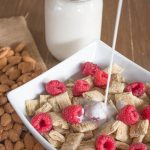