The two best things about a peach cobbler are 1) the way the peaches cook down into a kind of syrup and 2) the flaky crust that the peaches soak into. It might seem a bit bizarre, then, that we’re making a raw cobbler here where neither of those things can be accomplished. But don’t worry – what we’re doing instead is even better!

In order to give our raw cobbler that syrupy feel, we’ll blend a peach with some dates and then toss it with the rest of the fresh peaches… the crust will be a raw date/nut mixture… and there’s a vanilla chia pudding which acts as a creamy component and takes this dessert to another level.

Right about now I’m starting to regret leaving my community garden where members can take freely from the fruit trees. I remember shooting this photo last year, amazed that each of the 10 peach trees had hundreds and hundreds of fruit: 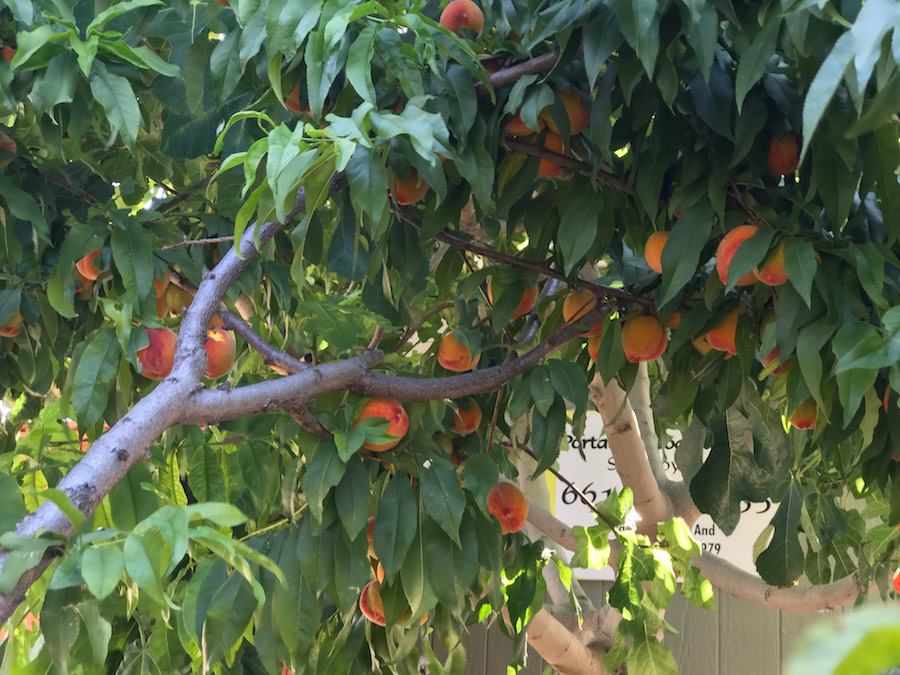 Nevertheless, Trader Joe’s has plenty of peaches and I don’t have to spend 4,000 hours a year pulling weeds in order to get them for “free”…

As you might notice, what I’m using here are actually nectarines. But Wikipedia tells me they are almost genetically identical, the only real difference is that nectarines lack the fuzzy skin of peaches. And since we’re peeling them, it really doesn’t matter.

Anyways, this recipe is perhaps the best use of peach season that I can imagine. That one amazing bite with a little date/nut crust… creamy vanilla chia pudding… peaches tossed in a sweet syrup… and a crunchy walnut topping is pretty ridiculous.

It’s almost hard to believe this recipe is literally nothing but raw fruits, nuts, seeds, and spices. 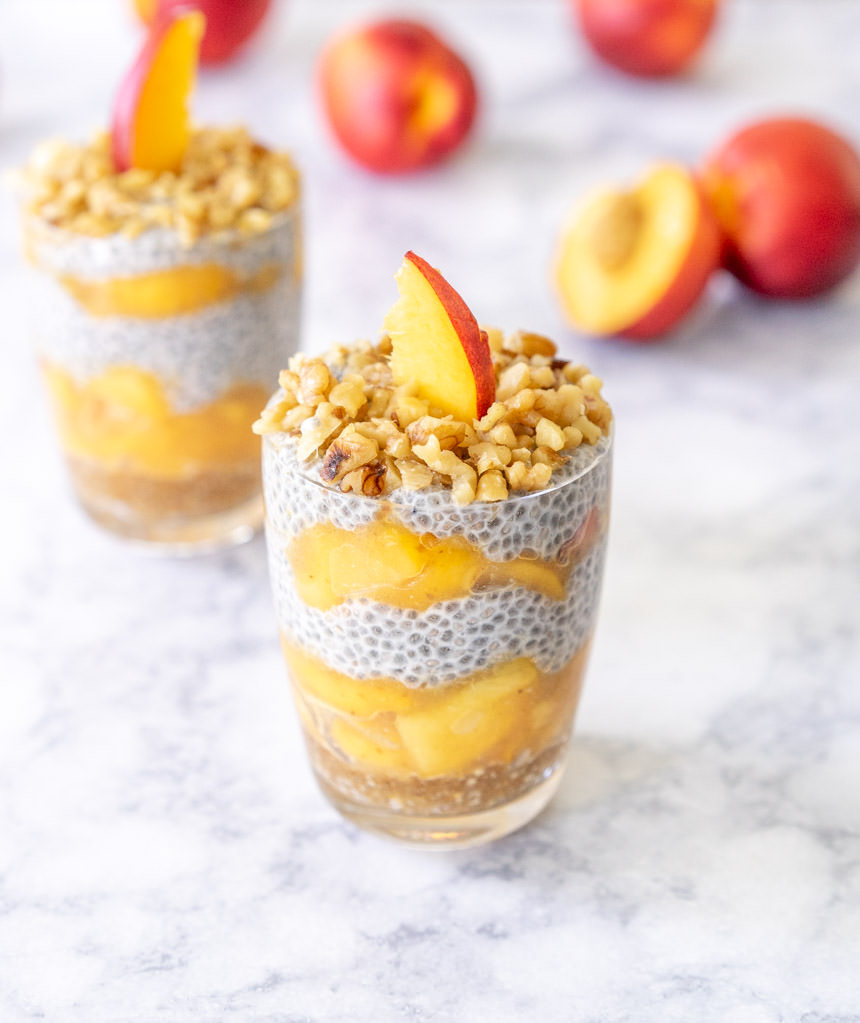 The only part of this recipe that needs to be made ahead is the chia cream, which is basically just a very basic vanilla chia putting. To make, combine three tablespoons of chia seeds with 1 cup of almond (or other non-dairy) milk, a teaspoon of vanilla, and a dash of stevia in a mason jar. Shake well and refrigerate for an hour until the chia seeds absorb the water and turn into a pudding. 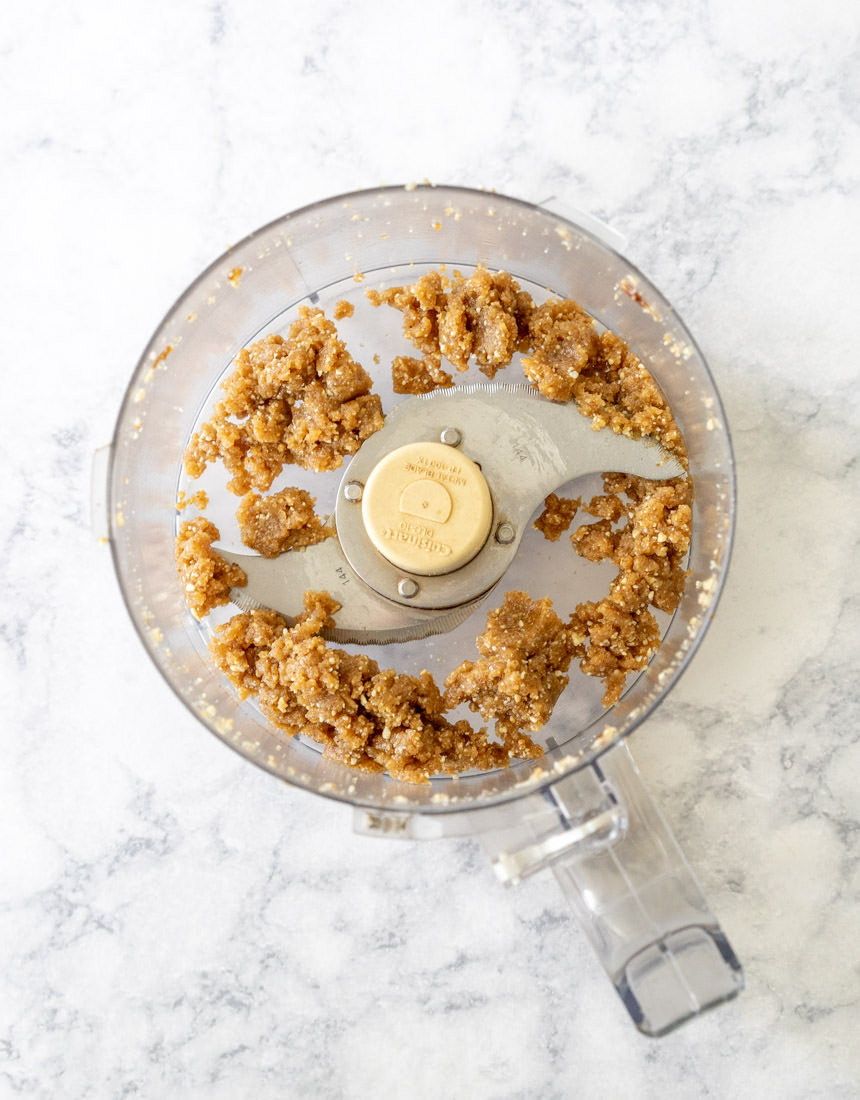 This is a classic raw date/nut crust that I’ve made a million times. In a food processor, combine three of the pitted dates (reserving the others for later), 1/3 cup of raw nuts (any kind will work, I used walnuts and a few cashews), and a pinch of salt. Run the processor until it breaks down into a consistent mixture. Remove from the processor and divide evenly between 3-4 serving dishes*, pressing into the bottom to form a crust. Pop these in the fridge or freezer to harden.

*Don’t use the kind of glasses I used in the photos. It might be good for the Instagram, but 1) the glasses are fragile and not practical and 2) the crust is buried at the bottom and impossible to eat until the end. A shallower dish like a ramekin would work better. 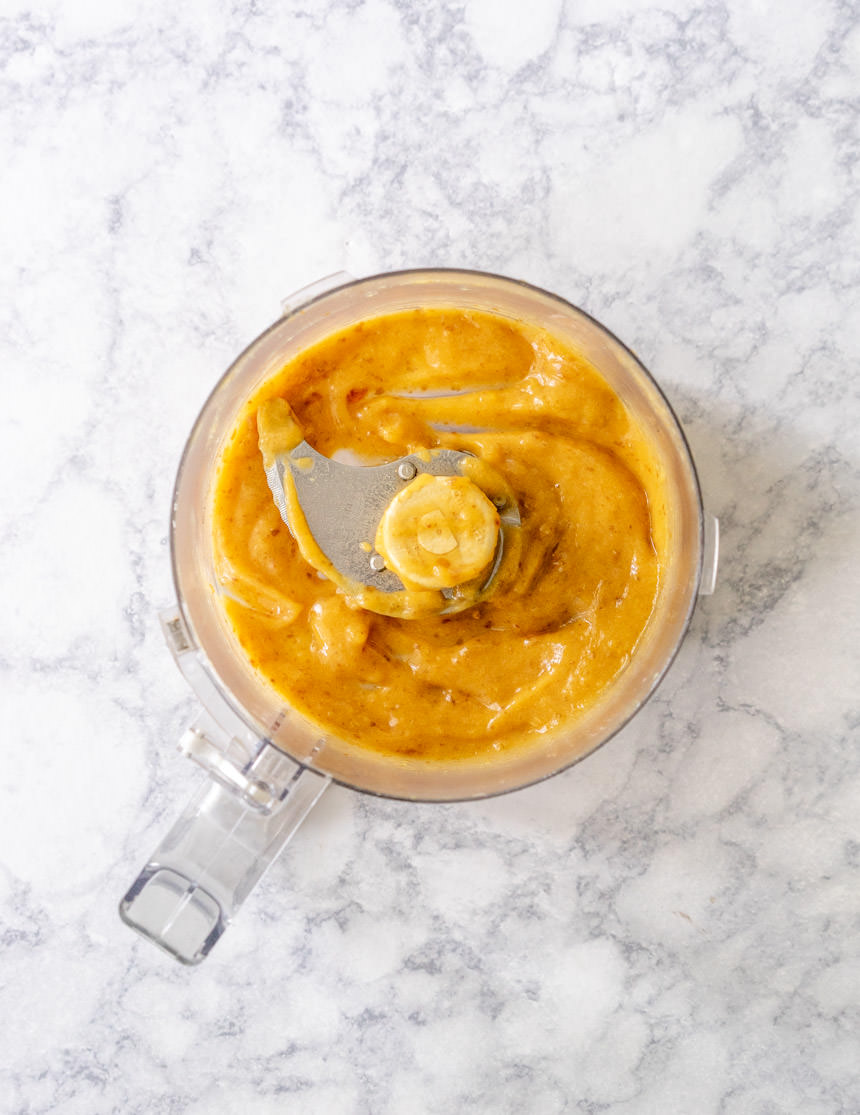 Back in the food processor, combine the other three pitted dates with one whole peach (peeled, with the stone removed, obviously), a dash of cinnamon, and about three tablespoons of fresh water. Pulse repeatedly and scrape down the sides as needed until you have a pretty uniform “peach butter” kind of mixture. When it’s smooth (a few small date pieces are fine), transfer to a large bowl. Peel and slice the three other peaches into small wedges and toss with the syrup.

Finally, grab the serving dishes with the crust and layer like this: a bit of the peaches, a layer of the chia cream, another layer of peaches, a final dollop of cream, and then (chopped) walnuts to cover the top surface.

Serve immediately or allow to chill for several hours. 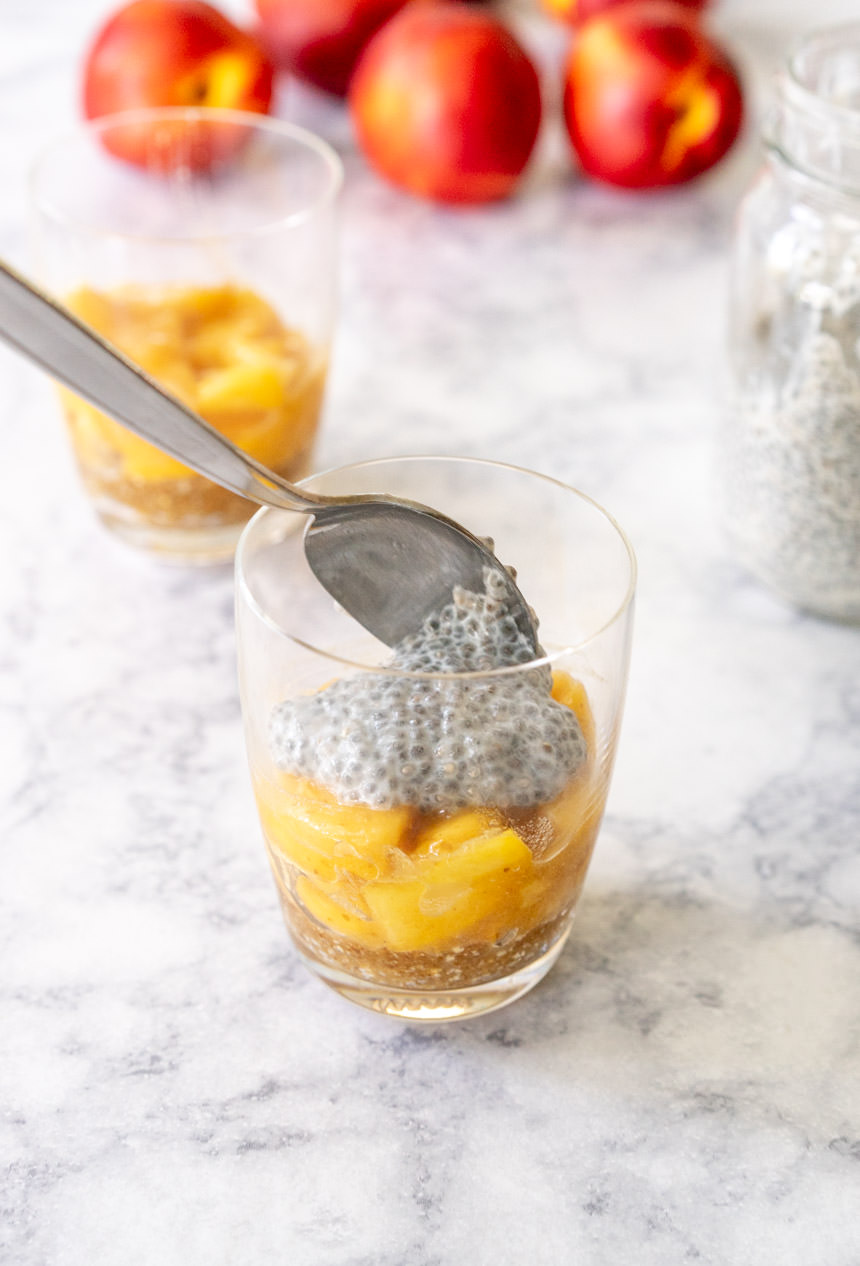 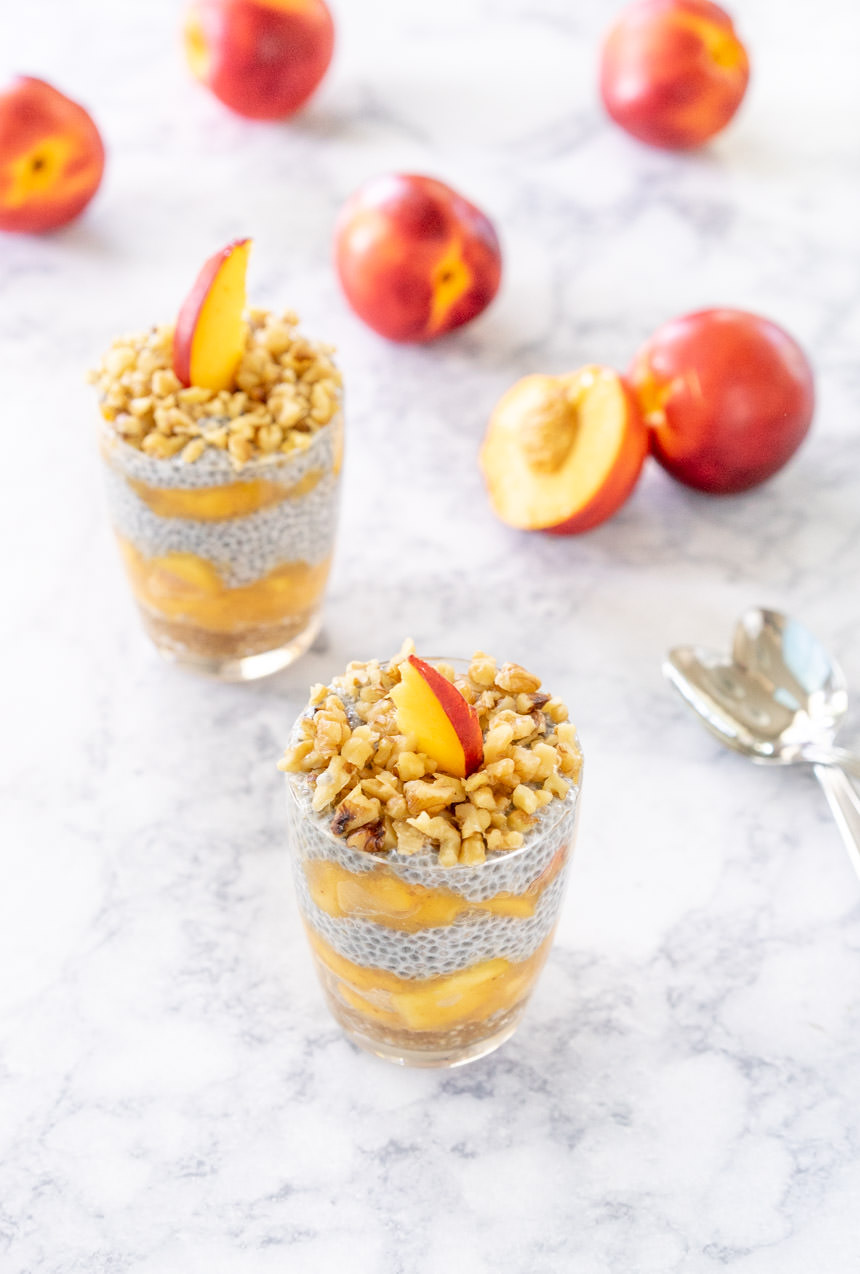 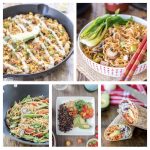 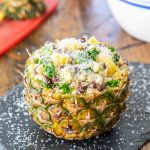