It’s funny, I spend my workdays creating interesting and creative recipes for you guys. But when it comes to the meals I make for myself, they’re usually incredibly simple. A can of pinto beans + half an avocado + corn tortillas = lunch on most days. But then, sometimes I like to get creative in the kitchen and develop artistic stuff just for fun. This recipe is one of those times. It’s not exactly a practical way to feed the family, but wow does it taste amazing.

“Carpaccio” is thinly-sliced raw beef (insert yucky face) often eaten as an appetizer, but here we’re making something similar by thinly slicing portobello mushrooms, marinating them in a maple/soy/miso sauce, and baking them until crispy. Then, we’re slathering them with an Argentinian Chimichurri Sauce, which is almost like a South American parsley-based pesto that is traditionally spread over meats (mushrooms in this case). As a fun Saturday afternoon project in the kitchen, you won’t be sorry you made this one. 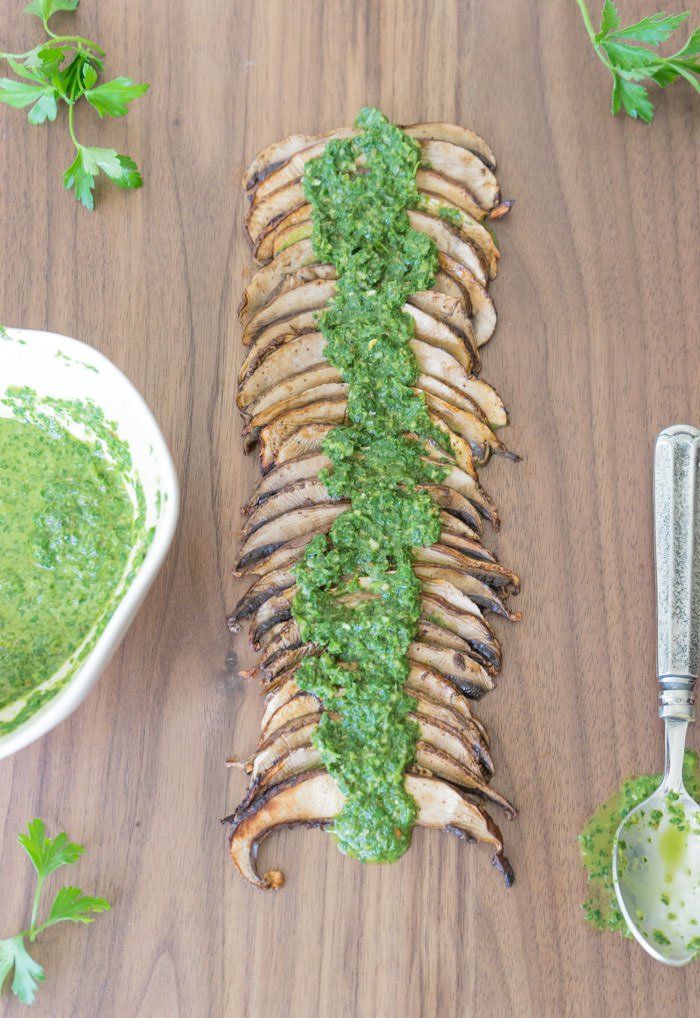 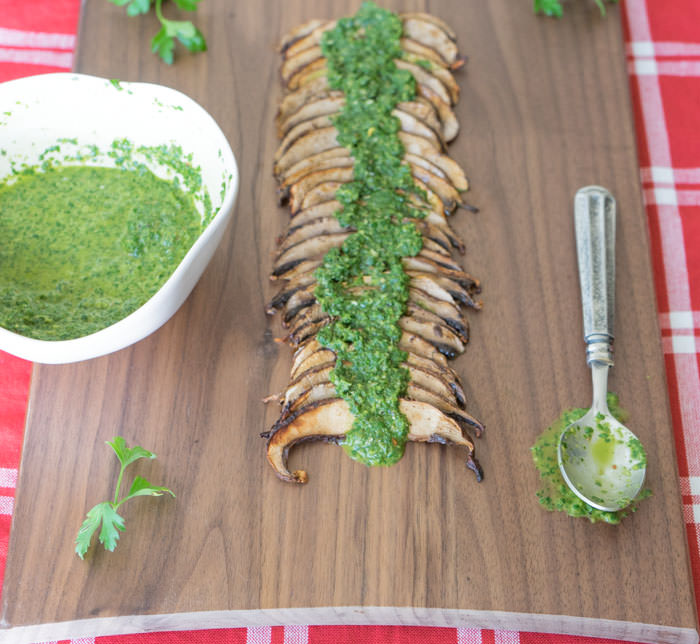 Slice some mushrooms! These mushrooms will shrink greatly in the oven, so you don’t want them paper thin, but also not thick slabs which will never get crispy. To do this, either use a mandolin slicer or simply a kitchen knife to carefully cut them evenly. Note: make a lot more than you expect to need, they shrink down more than you could imagine. 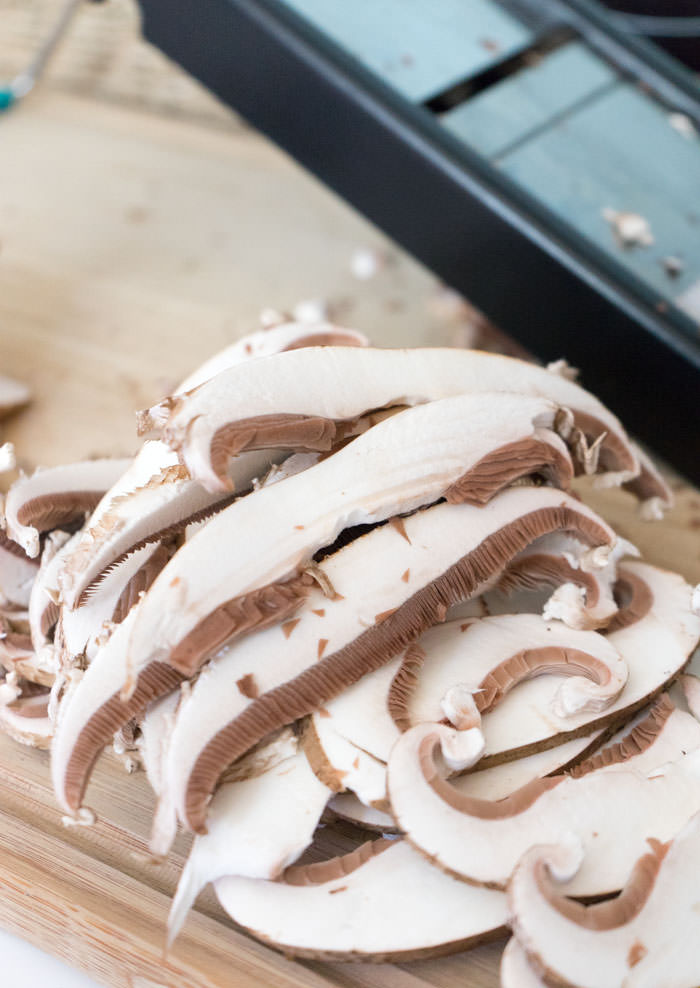 Make the marinade. Combine the red wine vinegar, maple syrup, soy sauce, and miso in bowl and whisk until incorporated. The exact proportions aren’t super important, and you can omit the miso if you don’t have it on hand.

Carefully add the mushrooms into a gallon-sized zip-top bag and pour in the marinade. Seal and gently roll the bag to evenly coat the mushrooms. Then, stick this in the fridge for at least an hour, up to 4 hours.

Preheat the oven to 375º F. Once marinated, remove the mushrooms from the bag and arrange them in a single layer on a baking tray covered in parchment. Bake for about 25 minutes or until they have browned but not burned. Watch them closely because they go from “perfect” to “charred” in a heartbeat.

To serve, arrange as shown on a platter and spoon chimichurri sauce (below) over top. They make a great appetizer, but should be served as soon as possible because they cool quickly. 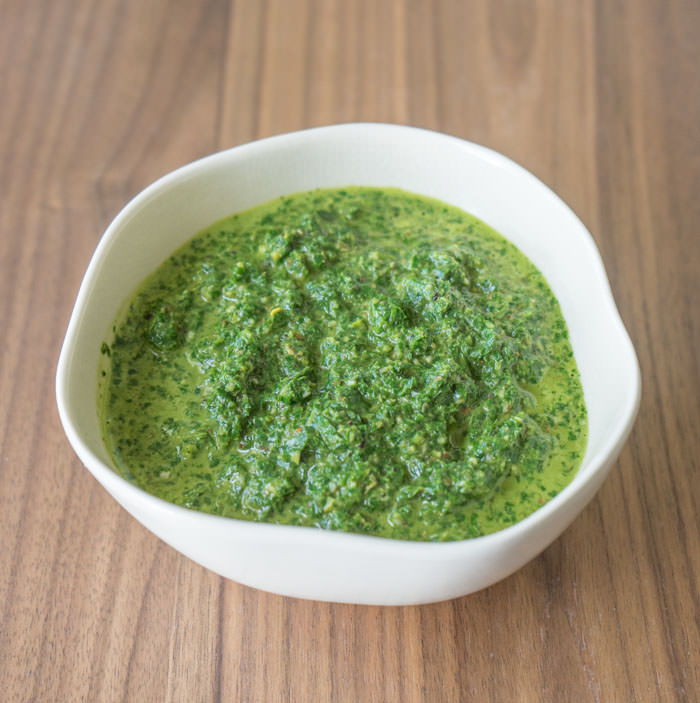 In my experience, every chimichurri sauce is a little different. The ingredients listed above are classic, but their exact proportions always vary. If you feel like you want more garlic, for example, feel free to adjust the recipe to your own taste. The only thing I did differently from the traditional recipes is that I used much less oil to make it healthier — you’ll never notice the difference.

To make, simply combine all ingredients into a food processor and pulse repeatedly until the parsley is broken down evenly and you have a sauce that resembles the one pictured – pureed but not completely smooth. Again, this is kind of like a parsley pesto.

In addition to spooning this over perfectly roasted mushrooms, it tastes amazing on pretty much anything. I tossed some into black beans for tacos, dipped tortilla chips into it, and even put it on ice cream (just kidding about that last one) 🙂 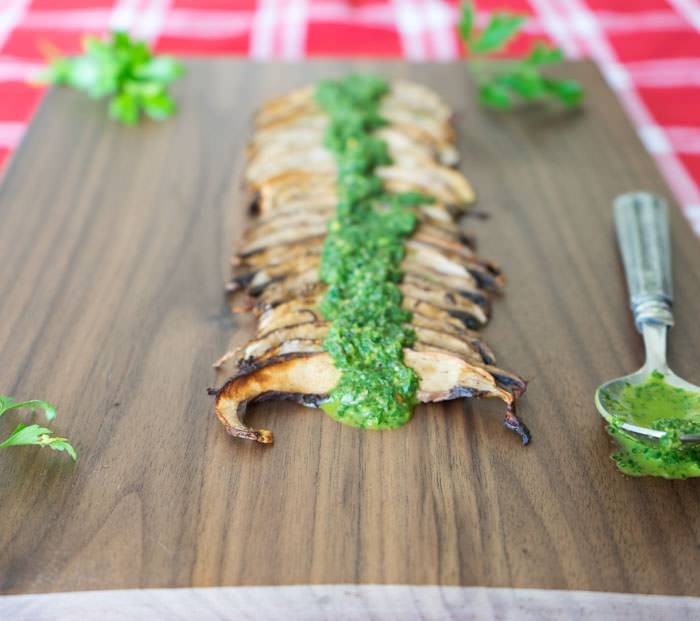 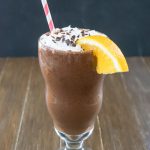 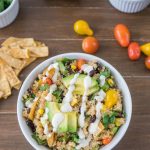